Wynton Marsalis : “You have to embrace your roots” 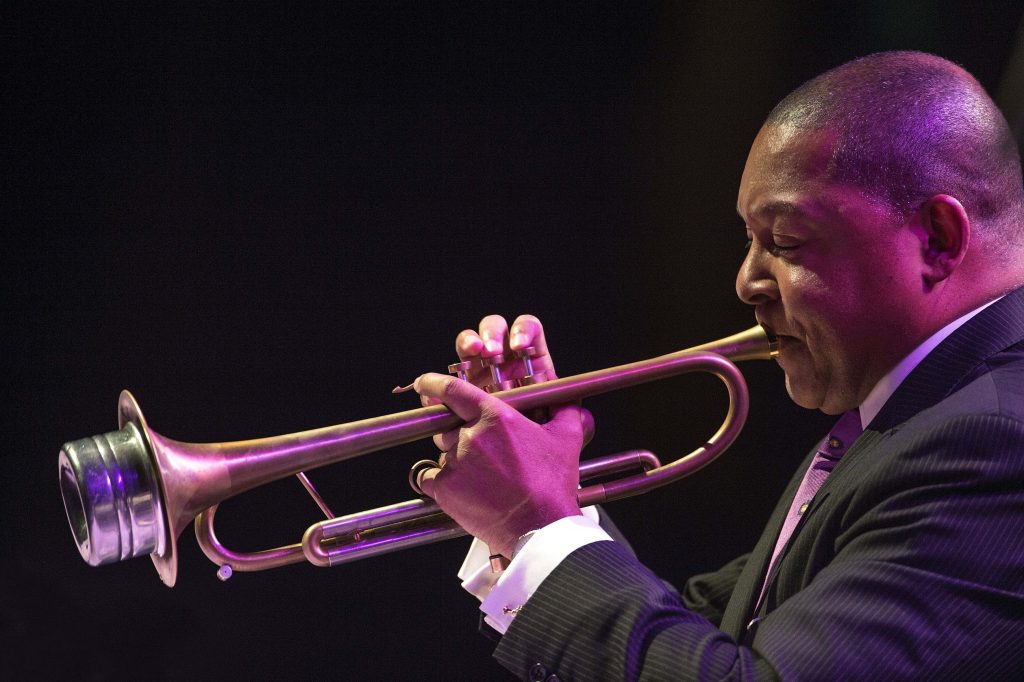 Abu Dhabi Festival. Saturday morning, March 25th. I meet Wynton Marsalis in one of the many marble lounges of the Emirates Palace. The American trumpet player, a living legend of jazz, runs on grapefruit juice this morning, while we’re having a little conversation.

MD I have always wanted to continue the work started by Pannonica de Koenigswarter with American jazzmen in the sixties and seventies, in her terrific book “Three Wishes”. So here you go: “If you could have three wishes granted immediately, what would they be?”

MD Miles Davis just answered with the laconic “To be white!”. And most wishes would be about getting money…

WM Yeah, at that time music was a matter of survival… Everybody struggled, you know.

MD Your father Ellis is not in the book, is he?

WM No, but Ali Jackson’s father is!

MD So what about your wishes?

WM I don’t know… (after some time)  It’s hard for me to say… My only wish would be that we have better education, all around. Not only technically, but better manners too.

MD You’re very much involved into the educational program at the Lincoln Center in New York.

WM Yes, and I have a couple of my students here with me, Jeffrey Miller and Immanuel Wilkins. We have 40 students at Juilliard, all of very high quality.  They’re young but they sure can play! It’s a great opportunity for them to have a new and different experience on stage, to see how the Abu Dhabi festival works, to see the seriousness of people here…

MD You mean we’ve lost seriousness in the West?

WM It’s just that I’ve really wanted them to get more cultural awareness, and to be able to meet and play with Naseer [Shamma]. To be around him will be very instructional for them. He’s a deep and intense person, and it’s always good to be around seriousness when you’re in a period of great foolishness.

MD Do you give any usual recommendations to young jazz musicians?

WM Don’t run from the Afro-American roots of the music. Use your intellectualism to figure out who the real intellectuals are: Jerry Roll Morton, Duke Ellington, Thelonious Monk… Try to be a part of the actual root and depth of the music. And always keep on searching! You have to develop very individualistic views based on knowledge, and it’s a truth you have to find for yourself. What I always say to them: the thing that you fear the most, run towards it!

MD It sounds like a good advice for life in general.

WM Yeah. It doesn’t mean that you have to be Afro-American though. Music is a sound, not a race. But jazz is a cultural identity and you have to embrace it. There is a lot of hostility around you trying to keep integrity, and this hostility is not coming straight at you. Sometimes it’s hard to decipher.

MD What do you mean?

WM Well, jazz has always been perceived as something subversive. And when you want to attack something subversive, you make it obscure. You make it seem like it doesn’t mean anything. You create havoc around it. And the essence of what it is eventually dies because it cannot survive the havoc. So you have to stay on your path and be true to yourself. You have to see through the propaganda, through the layers of illusion…

WM Yeah! And some of us fail the test!

MD You’re from New Orleans, so you have these jazz roots deep in you…

WM Oh, yeah, that’s where we’re coming from! Heavy blues, heavy swing… You have to embrace your roots.

MD Frank Zappa said in the early seventies something like “I’m not saying that jazz is dead, but it smells funny”…

WM He was just making a social commentary! I have no interest in his opinion about jazz. And anything serious smells funny once stupidity starts to take over. Anyway I believe in creativity and in tradition. I don’t believe they fight with each other.

MD What album would you take with if you were stranded on an island?

WM Most likely “Masterpieces” by Duke Ellington. There so much in that: “Tattoed Bride”… And besides jazz, maybe Beethoven’s late quartets.

MD Any band you would dream of having played with?

WM Our own band comes from Duke Ellington’s big band… But if I could be in any band, I would love to be in Count Basie’s in the 1930. It was such a community band! It had a community feeling. I think I also would have liked to play with the all-girls orchestra Vivaldi was working with. It would have been an amazing experience. (laughs) And the Chicago Symphony in the 1950s… The Berlin Philarmonic now… Such great bands!

MD You’ve had a long-time involvement with the Marciac festival in France. Will you be there this year?

WM I’m always there! I love it.

MD Any word on French jazzmen?

WM Lot of great musicians… Hervé Sellin is my man! His father was a trumpet player, he’s a pianist; my father was a pianist and I’m a trumpet player! (laughs) And I remember this story from the late eighties… I was with a bunch of people driving a bus in the south west of France. We stopped at a gas station. Somebody said that there was a jam session somewhere. So we went there, and there was some dude playing the saxophone like Coleman Hawkins! We were in the middle of nowhere and there he was: Guy Lafitte. It was surreal almost. That was the first time we met.

MD And then you got to know him very well…

WM Yeah, over time you start developing certain kind of personal relationships with other musicians. Especially with jazz because it has such a depth of soul in it. When you jam with people it’s like you’re inside their emotional orbit. There’s a certain intimacy, and it crosses all generations and cultures.

MD It sure does! Unfortunately, we have almost run out of time. Let’s wrap this up with some of the questions I ask every jazz player I meet. Are you scotch or soda?

WM Night! There is a lot that goes on in the night that can’t happen during the day (laughs).

MD “Blues for Alice” or “Alice in Wonderland”?

WM “Blues for Alice”, come on! I like “Alice in Wonderland” too, though…

MD The Rolling Stones or The Beatles?

MD Well, thank you for your time, Wynton!

WM My pleasure! I hope to see you in Marciac, we’ll get a drink or something. By the way, I love your Afro, man. Make sure to keep it!

MD I most definitely will.